The Vampire Killing Kit “Stackhouse”, inspired by True Blood created by the maker of the world’s finest kits, CRYSTOBAL, recently sold on Etsy for an undisclosed but record amount.

“The final purchase price is confidential, but I can say this kit has fetched one of the highest prices paid for an artistic vampire killing kit,” says Christopher Pinto, CRYSTOBAL’s agent. “It’s a testament to the quality and craftsmanship that goes into Crystobal’s work.” 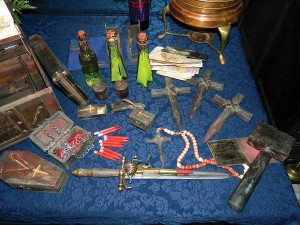 CRYSTOBAL’s vampire killing kits have always commanded the highest prices, as they are the ultimate in original, primitive style kits. As the original creator of this style of vamp kit, CRYSTOBAL has earned a reputation for building only the finest quality kits with incredible attention to detail, while keeping the prices fair and accessible to his audience.

“So many others have tried to mimic CRYSTOBAL’s style,” Pinto goes on, “But they fall flat…cheap imitations of the original art. I’ve seen some of these kits stay on sale for years, and never get sold because the price points are way too high for the lackluster quality that people try to pull off as art.”

Pinto also notes that recently there has been a trend in artists creating replicas of the finely-made, late 19th century kits, like those found at Ripley’s Believe it or Not museums. “Those kits are great, and we’ve seen some stunning examples being created that really look authentic. But they aren’t CRYSTOBAL’s style…he prefers to stick to his original, primitive style – the kind that would be made by craftsmen more interested in a solid, practical kit than something basic only for display.” He adds that CRYSTOBAL is currently working on another themed kit, but will not disclose the concept just yet. “Give him about another three months. This kit is another truly one of a kind that has never been created or imagined before, and it is taking some time to complete!”

CRYSTOBAL currently has only one kit left for sale on the Etsy store, the WWI Army Vampire Killing Kit. He assures us more kits will be produced in the future, one at a time, slowly and carefully.