How To Kill Vampires because they are unnatural jerks – The Book

Written by Christopher Pinto, as dictated by CRYSTOBAL

Yes, CRYSTOBAL has literally written the book
on how to kill a vampire.

A little funny, a little cheesy, and a lot of fun, the full-color print edition would be a great gift or addition to any occult or vampire collection. And for only 99¢, you could purchase the Kindle version which can be read on any tablet, iPad, Mac, PC or smart phone. Catalog under Fiction/Horror/Occult. 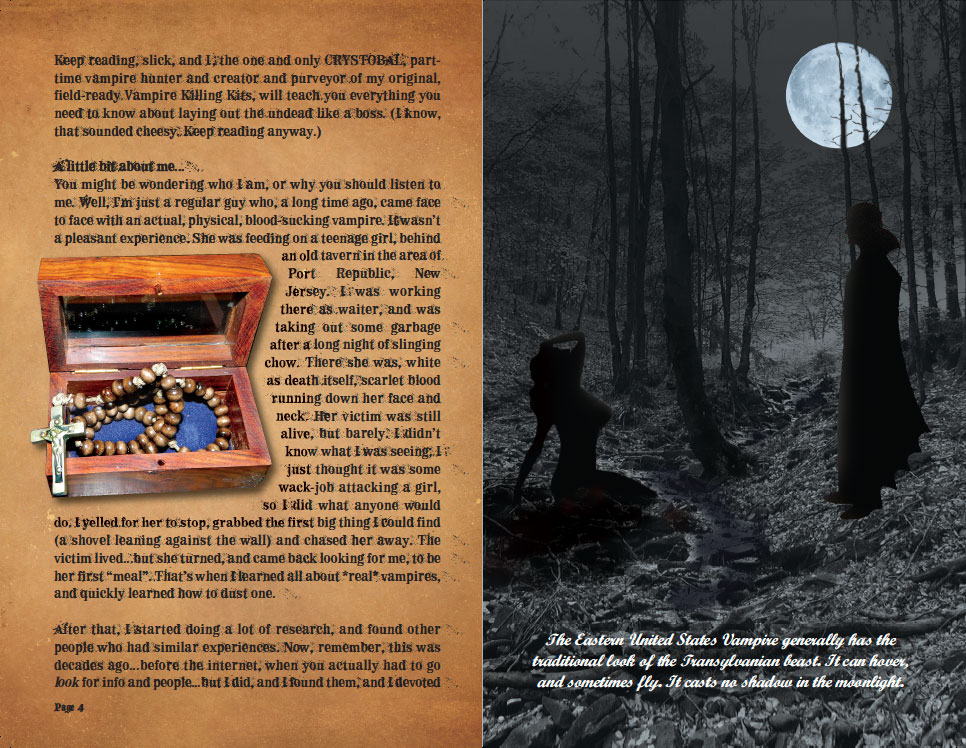 Book: How to Kill Vampires because they are unnatural jerks by Christopher Pinto and CRYSTOBAL; Dracula page spread

Christopher Pinto is an Amazon Best Selling Author of occult murder mystery books, including “Murder Behind the Closet Door”, “Murder on Tiki Island” and “Murder under the Boards”. He is a long-time friend and confidant of CRYSTOBAL, and was instrumental in writing, creating and laying out this book. Read more about author Christopher Pinto at the StarDust Mysteries website.

About the Book, How To Kill Vampires:

Have you ever been on a dark country road, face to face with one of the evil undead, and had no idea how to defend yourself? Well, probably not if you’re still alive and reading this.

Finally, there is a book that very concisely and very quickly teaches you how to defend yourself and others against Vampires, those annoying, smelly creatures of the night. With photos, tips and tricks to get the upper-hand in a Vamp attack, “How to Kill Vampires because they are unnatural jerks” gives you the fundamentals you need to survive a supernatural encounter with a blood-sucking scumbag. 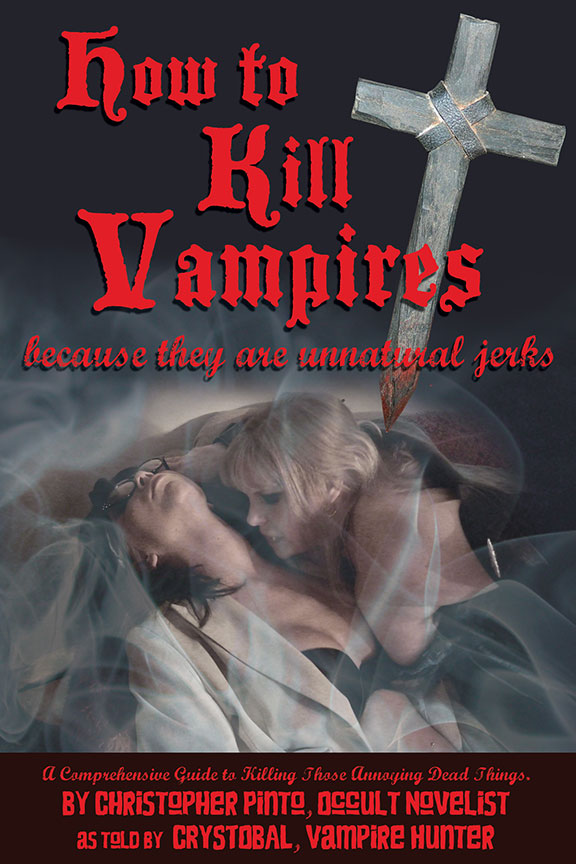 CRYSTOBAL, Vampire Hunter, Gothic Artist and creator and purveyor of the modern-day primitive-style Vampire Killing Kit, has been hunting and dusting vampires for five decades (he looks a lot younger than he is). With skills honed in the field, and years of research into the lore, legend and lives (er, eh, deads?) of Vampires, CRYSTOBAL is now passing on his ultimate secrets and experiences to the public in this very cool, full-color book.

Written by Amazon best-selling author Christopher Pinto (Bill Riggins Paranormal Mystery Series) as dictated by CRYSTOBAL, this book covers everything one needs to know, whether you are an aspiring Vampire Slayer or just some average Joe (or Jill) who is sick of Vampires screwing up your evening plans. This book highlights all the important aspects of finding and killing the undead: Stakes, Crosses, Silver, Garlic, Homestead Locations, Vampire Hangouts, Rock Salt, Holy Water and more, plus a special section on the use of CRYSTOBAL’s Vampire Killing Kits, and several methods to thwart a Vamp attack and turn the tables on the night-stalking twerps.

In addition, there are several personal stories by the Hunter himself, about Vamps he’s known and Vamps he’s dusted. Oh, and there’s a short section about the history of Vampires in the United States. Plus, there’s a section on Vampires in TV shows and movies. Ooh, and a little bit about how the U.S. Military has handled Vamp attacks, since Revolutionary War times. Oh yeah, and actual step-by-step attack sequence instructions. And more. Suitable for teens through adults, “How To Kill Vampires because they are unnatural jerks” is the perfect companion to any Zombie survival guide, ghost hunter’s handbook, or occult tome collection, and makes a great gift for Goth chicks or guys who like to stab dead things with a pointy stick.

“This is a tongue-in-cheek kinda book, a little funny, very entertaining and full of incredible photographs and graphics that make it a perfect book for your coffee table or dungeon.”
– Some guy on the internet

“If you like vampire legends and stories, this is a great addition to your collection. A truly original idea, written as if the vampire hunter were telling you these things person to person. Plus lots of fun photos and a kick-ass layout that makes it a cool book to have. Makes a great gift.” – Some Goth chick on the internet

“How To Kill Vampires because they are unnatural jerks” is intended for readers in their teens to adult. There is some mild language, and of course some violence when it comes to explaining how to kill vampires. Let’s face it…”Kill” is in the title. It’s not for young kids, or for wusses. This book is written in a campy, satirical way, and is a work of fiction (wink).