It doesn’t get more “one of a kind” than this. In fact, there is ONLY ONE WW1 US Army Vampire Killing Kit, because CRYSTOBAL invented it. Find another, and it’s a rip-off.

Dreamed up by the artist while watching a WW1 movie, CRYSTOBAL realized that being so close to the “time of Dracula”, it would have been the right time for Eastern European vampires to come out of hiding and feast on the bloodshed of trench warfare. CRYSTOBAL surmised that the United States would secretly find a way to thwart these attacks. This is where the WW1 US ARMY Vampire Killing Kit comes in!

He started with an era-appropriate replica box, bound in faux leather and having a distinct look of an chaplain officer’s military case. A very well-made blank-firing Colt 1911 replica pistol was to become the centerpiece. This is the type of sidearm that was used by the US military in WW1. Five “silver bullets” are also included.

Next came the stakes; they needed to look more military than Goth, so CRYSTOBAL designed them the way the army would have: Hardwood, pointed stakes, flat for ease of packing, painted olive drab green with red and white markings. 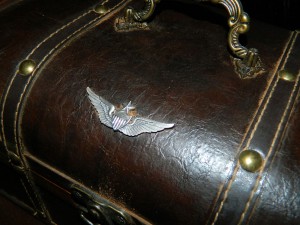 Since it is assumed this kit would be used by an Army chaplain, a heavy metal crucifix and hand-made wooden Rosary are included. A small vial of holy water is also included. (If the chaplain needed more, he could bless any water when he needed to). A metal “field mirror”, bottle of rock salt, silver chain, coffin nails and an original WW1 medic’s pouch for containing garlic are also included. The bible is an original 1915 issue. And to top it all off, the Army Chaplain’s special pin is affixed to the lid of the box. “V1 A14 US ARMY” is authentically stenciled on the sides of the box.

As can be gleaned from the photos, this US Army vampire killing kit is of the highest quality, and would be at home in any Vampire, Goth or Religious collection or museum. The .45 automatic is a STEEL replica, correct size and weight of the WWI issue army .45. The slide slides back and cocks the gun; the hammer comes down when the trigger is pulled. A realistic magazine holds up to 7 8mm blank cartridges.* The gun stocks are real wood.

This kit is currently for sale online at etsy.com at a special sale price of $499. If CRYSTOBAL had been commissioned to create this piece, the price would have been well over $1500.

[…] currently has only one kit left for sale on the Etsy store, the WWI Army Vampire Killing Kit. He assures us more kits will be produced in the future, one at a time, slowly and […]